Our Artsmark Trainers answer questions about their experiences of Artsmark

For Artsmark Celebration Week, we interviewed four of our Artsmark Trainers, Fiona, John, Julie and Sonia, asking them four questions about their experiences of Artsmark.

The interviews have been split into two parts, with the other being a special podcast episode for Celebration Week, which you can listen to here.

What are you inspired by from Artsmark?

Fiona: “The inspiration when I think of those schools, is that there’s an energy and passion for arts. There’s artwork everywhere, the kids can talk and be passionate about the artwork they do. The senior management team are very passionate and on board with it as well.

I remember one in particular – a local primary school. You go in and there’s artwork along every single corridor from top to bottom. The children met me and took me through the school and spoke about bits that were either their work, or sometimes a friends work, and the senior management were completely and utterly on board and passionate about the work itself and the impact it had on the culture and the nature of the school.”

Sonia: “I’ve been very lucky to have worked with, through Artsmark, lots of SEND schools around the country and I have found that Artsmark has been a fantastic way for those schools to be able to contribute to their arts and culture and be truly inclusive and diverse. SEND schools are used to working very creatively anyway and so for them, when they come across Artsmark, the feedback has been that SEND schools say “ah we do this already” and it’s just a brilliant framework that we can use to move forward and create more innovative work where our young people can show progression on their terms. I think that was my biggest inspirational moment, going in with these kind of SEND schools and thinking how can I teach them about Artsmark, and actually by the end of this process and further down the line, actually it’s what can SEND schools teach us about the arts and cultural provision that is possible in schools with a wide variety of young people?

This is because SEND schools are used to working in a bespoke way. They’re used to working in partnership with arts organisations in a much closer, sometimes more intensive and developed way, so I do know of a story of an SEND school that worked with an arts organisation that said they really wanted to work with them but didn’t have experience of working with young people with those particular challenges. And actually, the school, rather than saying well no not you then, said well you know what actually if you can come in, have time, we can plan in time to meet our children, time to discuss with us what sorts of things we know might work, then you can bring your creative expertise and we can bring our expertise around the children, and it worked really well. In terms of partnerships, it was a fantastic success.”

What is your favourite thing about Artsmark?

John: “My favourite thing about Artsmark is that it’s a national award and it goes on a school website and it’s branded. I know as an artist who works with schools, but particularly who runs an arts organisation that works with schools, it’s so much easier if I can go onto their website and see Artsmark on there somewhere because I know then that there’s somebody that I can contact or that they’ve got some experience doing creative work with outside organisations. I’m old enough to have been around many schools where you approach them and you don’t know who to speak to, there’s no way in and they’re not really sure what you’re trying to do, so Artsmark having that national brand, for me as someone who approaches schools, is a really useful indicator to know where they’re at.”

Fiona: “I don’t necessarily have a favourite bit as there’s two ends to it. One favourite bit would be taking people who don’t really have an arts culture in their school and encouraging and supporting the senior management team and the arts teachers that are there to move forward with that, giving them ideas, suggestions, opening thought patterns for them with some of the questions that you ask, listening to them, moving forward with them based on the ideas and impact they want to have, and I suppose seeing their engagement and their passion build as they go through that process.

How did you become an Artsmark trainer?

Julie: “I became an Artsmark trainer I guess almost by accident because I was already working really heavily with Artswork through Arts Award as a trainer, and running support sessions and just increasingly, I found the conversations I was having about Arts Award with schools and education settings would include some kind of aspect about Artsmark, possibly because people were getting confused between the two and we needed to make that separation, but also because we really understand that the two programmes work really well together and can complement each other. So for me, it felt like a bit of natural progression to apply to be an Artsmark trainer. It was CPD for me actually and it was a good bit of development and I’m really glad that I did that because throughout my work as a freelancer in both programmes I talked about the two all the time so it was definitely a good thing to do.”

Why would you recommend Artsmark to schools?

Sonia: “I would recommend Artsmark to schools because of the framework. It enables all kinds of settings to engage in arts and culture in a strategic way, and takes teachers and senior leaders through a series of very clear, defined steps in order for them to self-assess where they are, in order for them to map across their own priorities against Artsmark priorities and then to create an action plan going forward of what they’d like to achieve over the next 2 years. For me, it is the framework that is the power of Artsmark and is the one thing that enables schools to really evidence impact in the work that they do, so that they can share their story and celebrate their love of the arts to the wider world.”

Julie: “I’d recommend Artsmark to schools for the main reason that they’re able to use it as a piece of whole school development, as a journey to ensure that arts, culture and creativity are embedded right across their curriculum, in lessons, in enrichment time. For the newest arts lead and for the teacher that is fairly traditional in their ways, I think there’s always something new to learn and I think it’s just a fantastic way of making sure that arts and culture sit right at the centre of the school, within the values of the school and a part of the school improvement plan.”

Bonus: Can you use Arts Award as part of your Artsmark Journey?

Julie: “You can use absolutely Arts Award as part of your Artsmark journey and there are lots of ways you can do that. I’d always really recommend you consider it fairly near to the beginning, so you can use it in your Statement of Commitment. Arts Award training for the advisor is valid CPD for the CPD criteria of your Artsmark, but when you flip to the other end of Artsmark as well, when you’re thinking about impact measurement, Arts Award provides a really great way of gathering both data in terms of award numbers etc, but also lots of really great qualitative information from young people around their reflections and their responses to the arts. You can lift those straight out of logs and portfolios and use those in your Statement of Impact, so there’s lots of ways in which the two programmes meet in the middle.”

As part of our work to create Cultural Education Partnerships, we have put together Cultural 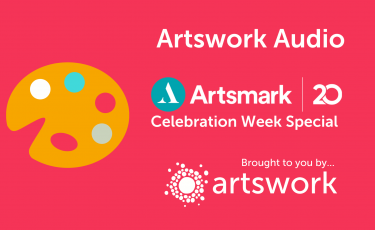 In this special episode of Artswork Audio, for Artsmark Celebration Week, we interviewed four of 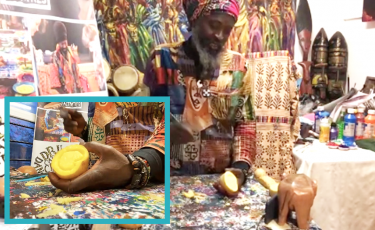 Founder of African Activities, Kwame Bakoji-Hume, took centre-stage across Zoom in a room full of 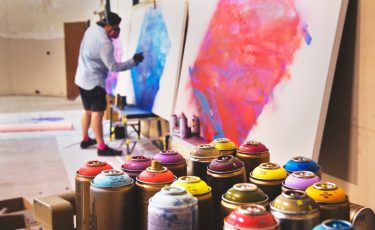 See all of our events

Receive the latest News & Events straight to your inbox Subscribe